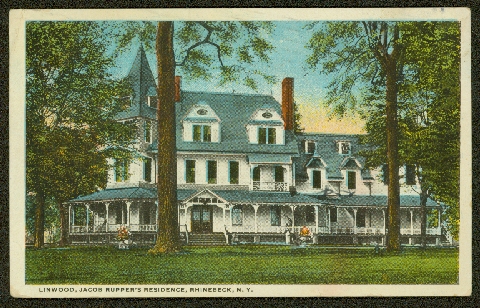 Why were postcards so widely used?

In the late 19th century and for much of the 20th century, long before the invention of Facebook, postcards served much the same purpose that social media serve today. Postcards were a convenient way for friends or family to tell each other what they were doing, to show where they had been, and to communicate brief messages. They were the medium to use to keep each other up to date, especially if one didn’t have the time to write a letter, and postal rates have always been less for a postcard than for a letter.

What’s the best way to view these postcards?

We are presenting the actual postcards through a database of records with information fields and a link to the actual postcard. The postcards presented here on the Consortium website are mostly of scenes in Rhinebeck. A few are of scenes in neighboring Red Hook. We are also including the back sides of the postcards. The database is structured as a finding aid. The postcard Title is usually what is listed on the front of the postcard. We have also added a Description. Despite our best efforts to describe each site, please note that sites often change names with changes in ownership, so if a search using a familiar name has yielded no results, it could be the site is listed under some other name. The database includes names and addresses of those To whom the postcards are addressed, and we’ve tried also to decipher the signature (if there is one) of the person From whom the postcard was sent. It has also been fun trying to decipher the sender’s Message. Some may be interested in the Stamp used to mail the postcard, or the Publisher. The MEDIA LINK takes you to the actual postcard images.

Despite our best efforts, there remains text we have been unable to decipher, or which we may have deciphered incorrectly. Users of the database who notice such failings on our part are strongly encouraged to help us improve the database by letting us know about any such errors. Please send an email to Michael Frazier at

The collection will sometimes include more than one copy of the same postcard view. The repetition is partly because we are as interested in the handwritten messages as we are in the views. Also, the repeated appearance of a particular view tells us this site was considered important. The Bridge and Lake at Ellerslie, for example, appears twice, and although the bridge was dismantled more than 50 years ago and the lake drained very recently, the message on one of those cards, written in 1912 to someone living in Troy, New York, is simply "No doubt you will recognize this place." Very few today are able to recognize that scene, but the fact that it was a popular postcard subject tells us it was both a familiar and important site 100 years ago.

Will there be more postcards on this site?

We began our posting with cards from the Rhinebeck Historical Society collection (labeled RHS) and have more recently added a very large collection from long-time collector Scott G. Cruikshank (labeled SGC). Scanning of all this material is courtesy of David Hoffman and David Miller, descriptions courtesy of Alex Cuesta and (again) David Miller, and electronic transfer to this website courtesy of Steve Hubbert. Deepest thanks especially to Scott Cruikshank for his willingness to allow us to share with everyone a collection that it has taken a lifetime to put together. We hope all appreciate his generosity.

Meanwhile, we are seeking additional volunteers with the skill and patience to scan and decipher additional postcards. Volunteers should write to us at michaelfrazier@earthlink.net. The Museum of Rhinebeck History has given us permission to add the hundreds of postcards in their collection to this site, and as we receive permission from additional organizations and individuals holding important postcard collections, our plan is to scan, describe, and post their material as well.